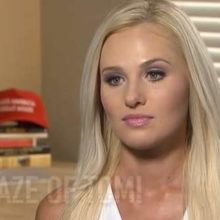 There really isn’t much more to say after you’ve seen “I’ve been silenced” in a tweet from ABC News announcing that Tomi Lahren is speaking out about her lawsuit against Glenn Beck and TheBlaze. Lahren appeared on “Nightline” to describe the details of her silencing to ABC’s viewing audience. For better or for worse, Beck chose to hand Lahren a microphone a while back, and Lahren parlayed that exposure into a guest spot on ABC’s “The View,” […]