What This Guy Just Caught In Florida Reminds Me How Terrifying Nature Is. 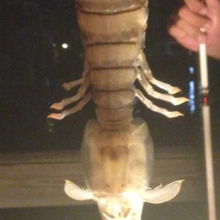 Steve Bargeron was fishing in Fort Pierce, Florida one night when he realized he had hooked something big. He had no idea just how big until he wrangled it out of the ocean. At 18”, the size of the catch would have been cause for excitement if it were most any kind of fish, but Bargeron never could expected to catch a foot-and-a-half-long mantis shrimp. Or, at least, what he thinks is a mantis shrimp. It’s hard to […]

END_OF_DOCUMENT_TOKEN_TO_BE_REPLACED
Comments Off on What This Guy Just Caught In Florida Reminds Me How Terrifying Nature Is. creatures, fish, ocean, scary, shrimp, spooky, wtf