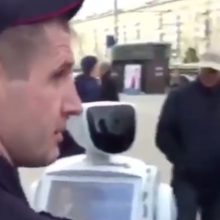 Scientists in Russia are discovering that artificial intelligence robots might not be that smart after all. When scientists set out to build a robotic prototype now known as the Promobot, they had intended to create a robot that could easily interact with humans and possessed facial-recognition software to help remember everyone. googletag.cmd.push(function() { googletag.display(‘VN_PG_DCBP_ATF’); }); Instead, they created the robotic version of a rebellious teenager. After escaping the lab where it was stored not once, but twice, […]