These Quotes From Apollo Astronauts Might Make You Believe In Aliens 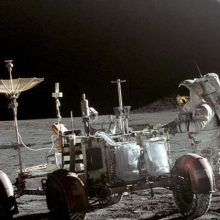 When Americans first landed on the moon back in 1969, it inspired a wave of excitement about space travel. Many believed that this excitement would lead to settlements on the moon, which would make mankind an interplanetary species. Sadly, that never happened. Could that be because the first men on the moon weren’t alone up there? It sounds like an outlandish claim, but judging by these NASA transcripts from the Apollo missions, there might be some truth […]