Did You Know These 4 Animals Are Actually Older Than Trees? What In The..?!

When you think about life on Earth, it’s natural to think of trees as the dominant life form on the planet. Trees are everywhere, giving us rich oxygen and something pleasant to look at in otherwise lifeless places. The first modern tree appeared nearly 360 million years ago, and as strange as it sounds, it wasn’t the first life form.

In fact, it came into a world already full of life. Some of those life forms are still alive and everywhere today, like these 4 animals:

Horseshoe crabs are some of the hardiest creatures to ever walk (or scuttle) the Earth. They date back to at least 450 million years, whereas the earliest modern tree dates back to between 345 and 360 million years ago.

Horseshoe crabs are commonly referred to as living fossils, since they have not evolved in any significant way for millions of years. They also survived more than their fair share of mass extinctions.

Recent research puts the appearance of modern sharks to around 400 to 450 million years ago. They survived at least four mass extinctions in the duration of their existence.

The species branched out all over the place since then, and there currently exists an incredible variety of shark species swimming in the oceans. By some counts there are more than 470 distinct shark species in existence.

Clocking in at just about half a billion years old is the jellyfish. These buggers have been around for longer than nearly any other life form on the planet. They are, in fact, the oldest multi-organ creatures on Earth.

Right up there with the good old jellyfish are the nautiluses. Research puts them at nearly 500 million years old. These sea creatures are about as hardy as they come, and are also known as living fossils. Take that, horseshoe crabs!

I wonder what animals will still be on Earth in another 500 million years or so. My money would definitely be on jellyfish and trees. (That’s if the Earth is still here, of course.)

ShareTweet
Comments Off on Did You Know These 4 Animals Are Actually Older Than Trees? What In The..?! ancient animals, how old are trees, older than trees 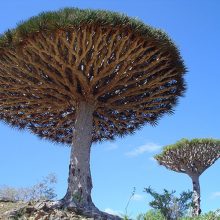