Some Photos Just Lend Themselves to Hilarious Edits. This One Was Perfect.

Sometimes, photos just work out beautifully, like this one. When photographed from above, this cat turned into a perfect sphere of fluff:

Even better, though, are the endless possibilities afforded to us by way of photo editing programs like Photoshop. Images as already fabulous as this one can be brought to new heights of incredible WTFery. There’s even an online community on Reddit known as Photoshop Battles, which describes itself as “a place to have fun with everyone’s favorite graphic software.” This round cat was, of course, a natural.

Here are some of our favorites from the Photoshop Battle that ensued. People went for pop culture references, riffed on the geometrical form, and alternately used and discarded the tail.

The next logical step.

Reddit/murlurker
Three Wolf Cat, after the infamous T-shirt that spurred many a satirical review.

It’s even more dangerous if you have allergies.

Premade snowman heads, all the rage this winter.

You knew this one was coming.

You said you wanted your coffee light.

People with cat allergies know this as the dander-lion. (I’m sorry.)

It’s a known basketball cheat that using a round cat instead of a ball will allow you to levitate.

The cheerleader second from the left is having a hard time with the new pompoms. 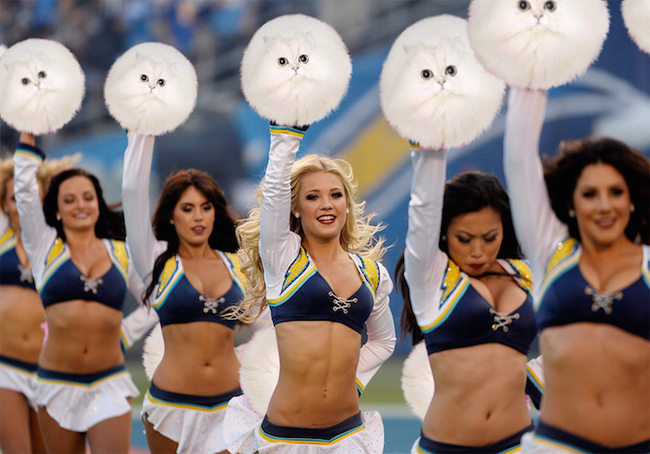 ShareTweet
Comments Off on Some Photos Just Lend Themselves to Hilarious Edits. This One Was Perfect. cats, funny, hilarious cats, photoshop, reddit, round cat, roundcat